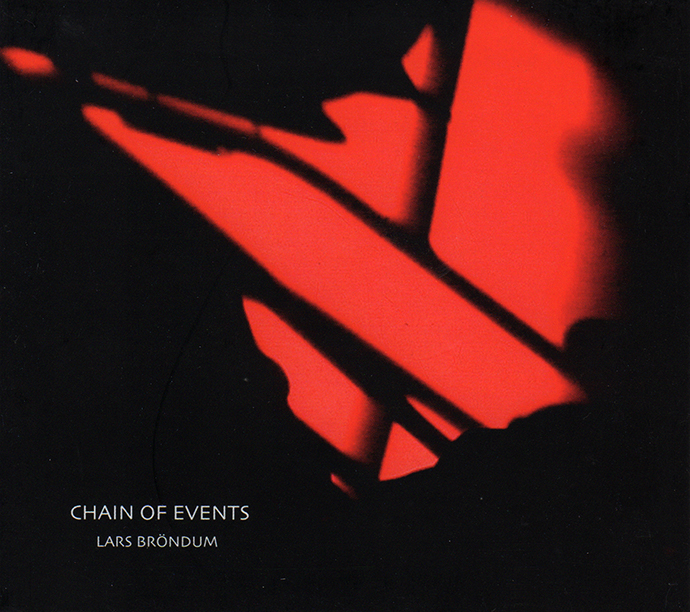 The cd Chain of Events is a collection of nine pieces composed by Lars Bröndum. The music was recorded between 2006-2010 and has been performed in Japan, USA, England, Scotland, Spain and Sweden. Lars Bröndum composed the pieces using an analog modular system, Theremin, effect pedals and computer treatments. Featured guest musicians are violinist George Kentros, pianist Lisa Ullén, Emil Strandberg on trumpet and Yann Le Nestour on contrabass clarinet.

The sound material in ”Siren Trap” was generated by recording sounds from a guitar through various pedals and effects into Bröndum’s Max /MSP patch ”Trap”. In ”Trap” the sounds are processed further through loops, granularization, pitch shifting and filtering. Siren Trap was composed 2007. The piece has been performed in Youngstown, Ohio in USA and at Fylkingen in Stockholm, Sweden.

(…the property possessed by a moving body in virtue of its mass and its motion) is a live electronic piece composed from microtonal clusters, rhythmic ostinatos and self-oscillating feedback loops. Theremin, analog synthesizers, T-resonator, loop-pedals and a sampler was used in live performances. The piece was premiered in Youngstown, Ohio in 2009 and has also been performed in Japan and Sweden.

(the coefficient of restitution (COR), or bounciness of an object is a fractional value presenting the ratio of speeds after and before an impact) is a piece written for the ensemble ReSurge. It was premiered on November 5, 2009 at Ventil #5 at Gävle Teater. C.O.R. deals with “bouncing” movements, both in the acoustic and the electronic realm.

”The Evitable Conflict” was inspired by Isaac Asimov’s ”I Robot” short story regarding ”glitches” that are deliberate acts by the Machines. The piece was composed in 2007 and it has been broadcast on Swedish Radio Monitor on April 24, 2007. The piece was premiered February 22nd, 2009 at the Campo de Interferencias in Madrid, Spain.

”Radio Trap” was composed by feeding live sound snippets from a radio through assorted pedals and guitar effects into my ”Trap” sofware (Max/MSP). ”Trap” is a setup of different delay lines and loops where the sounds are further mangled with granularization, filtering and pitch shifting. When performed live the piece entirely depends on what is on the radio at the time. This recording is from July 24, 2007.

”Surge” for violin and electronics was written partly in 1992-93 and was completed in 2004. The electronics were revised in the 2004 version. The electronic sounds are generated from the original violin part recorded by Debhora Barber in 1992. Surge is in two movements: the first movement is built around aggressive fragmented surges, the second movement is reflective, slow and improvisatory. Surge was performed by George Kentros and Lise-Lotte Norelius on the SEAMS 2007 tour: October 30 at the Brew House, Geiger in Gothenburgh (premier), October 31 at the Moonshake Club in Umeå, November 1 at NyMus in Härnösand, November 2 at Vindöga in Sandviken, November 3 at Fylkingen in Stockholm.

The form of ”Chain of Events” consists of seven events. The pianist initiates the events and the live-electronics respond accordingly. Some events are repeated and the electronics also has a cadenza half ways into the piece. The piano score is written to make use of the sounds inside and outside the piano. This involves scratching, bowing strings, closing the lid etc. The ”piano events” are also manipulated in Bröndum’s Max/MSP patch ”Trap”. The electronic part is notated graphically and makes use of quartertones, clusters, feedback and noisy textures. The live setup consists of a Theremin, a loop pedal, effects and a laptop. Chain Of Events was premiered on January 31, 2010 at the GEM music days at the Hudderfield University in England. This is a live recording from February 5, 2010 at Fylkingen in Stockholm.

There are many connotations to revolving lights; lighthouses, pulsars, religious experiences. However, the title ”Revolving Light” refers to the revolving LEDs that Lars used to trigger sounds in a Max/MSP patch via a webcam. The piece was composed 2008 and was premiered at The Soundings Festival in Edinburgh, Scotland, Reid Concert Hall, February 7, 2009.

Illusions of self-motion in Circular Vections “occur when one moves or feels one has moved without feeling that one has made the movement. Motions can include movements of the whole body or movements of single limbs. Illusions include vestibular illusions, vection, sea legs, the ideomotor effect, and alien hand syndrome.”

This is a live recording of ”Circular Vections” and a premiere at the Loop-Line venue in Tokyo, Japan, March 5, 2010. Lars performed a solo set at the concert and also did a duo set together with Tetuzi Akiyama. This recording is an abbreviation of Lars’ solo set. The whole concert is available on Lars Bröndum’s cd ”Kötoku-in” – Made in Japan from MuArk.

Lars Bröndum, PhD, is a composer, performer of live-electronics, theorist and guitarist. His music has been performed in Sweden, Japan, Scotland, Lithuania, Latvia, England, USA, Spain and Mexico and has been broadcast on radio and webradio in Germany, England, Sweden and USA. His music often explores the interaction between acoustic and electronic instruments and lives on the border between written music and improvisation.The compositions are generally structured around cyclical processes, irregular ostinatos, fragmented gestures and microtonal clusters. Lars performs live using an analog modular system, a Theremin, effect pedals and a laptop with Max/MSP. Bröndum often composes for (and plays with) the ensembles ReSurge, ExSurge and Spiral Cycle. Other projects that he is involved in are the ”Ensemble SFW” and a duo with Sten-Olof Hellström. He has received composer grants from Konstnärsnämnden (Swedish Art Council), STIM (Swedish Performing Rights Society) and awards from FST (Swedish Composer´s Society). Bröndum is the founder of the independent record label MuArk.
Lars is an active composer at EMS (Electroacoustic Music in Sweden) and is on the Board of Fylkingen (new music & inter media art society) and SEAMS (Society of Electroacoustic Music in Sweden), and was Chairman in VEMS (Composers at EMS) 2007-2008. He has served as a board member on the Swedish Section of ICEM (International Confederation for Electronic Music). In 1992 Bröndum finished his PhD in Composition & Theory at the University of Pittsburgh.The dissertation is entitled ”Formations for Chamber Orchestra” and ”An Analytical Study of Voice Leading and Pitch Class Set Structure in György Ligeti’s Kammerkonzert Für 13 Instrumentalisten”. ”Formations for Chamber Orchestra” is an original composition and the analytical part proposes a model for analyzing cluster music by combining set theory and linear analysis. Lars also has a Masters in Music in Composition and Music Theory (1989) and a Bachelors of Music degree in Guitar Performance (1987) from the Dana School of Music at the Youngstown State University
More info at:
http://www.brondum.se/MuArk

4 (on a scale from 0 – 5 where 5 is the highest grade)
The new album ”Chain of Events” gives a cross section of Brondums ability to address the interaction between acoustic and electronic instruments on the border between composed and improvised music. ”The evitable conflict” (inspired by a short story in Isaac Asimov’s science fiction classic ”I, Robot”) is immersive and evocative in all its brevity. The title track however is a in a form of seven events with a sort of call and response between the piano and live electronics, from chilling to meditative swarming response technology.

A new generation … It’s common to talk about generations, especially in the artworlds. New generations indicate new attitudes and in music: new music….